Any mastering-studio is only as good as it’s monitoring-system, and even more important, acoustical treatment. All rooms have room-modes which creates an uneven audio spectrum. This is not something you want and most certainly not in a mastering-studio. To make the monitoring sound at it’s absolute best, I spent a lot of time and effort in the acoustics of the studio.

There are no parallel walls to get rid of a lot of most standing waves (which all rooms have). After some serious measuring, I added a large amount of acoustical treatment. The full backwall is a 70cm deep broadband basstrap. The double studio-doors are not just massive and heavy (about 60kg), but the inner door also suits as a fractal diffuser. I made a lot of the other basstraps myself, but there is also a large amount of GIK acoustics treatment. This includes 6x monstertraps (4x with range limiter), 4x tri-traps (floor to ceiling), 3x 244 traps and 6x (custom-built) tuned (47hz) membrane traps. And ofcourse, I also thought of diffusion in the form of fractal diffusion at critical points.

The room itself is soundproofed with double, triple and quatro (!) walls and ceiling. The studio DAW is mostly passivelly cooled and so deadsilent. The silence is deafening 🙂

Because of all the soundproofing and isolation it’s also airtight which means, no fresh air. To get fresh air, I designed a remote-controlled 4 speed silent and soundproofed airsystem using a silent fan built into a huge silencerbox with carbon-filters. These filters also help to get rid of the ‘polluted outside air’. The air is circulated by making use of over-pressure. The polluted/used air is 'pushed' out of the room by using air-grids in the front wall. These end up in the 4 (four) layers thick wall and moves the air outside without sound going outside or coming inside again. For natural daylight, I installed a Solatube system and LED daylight lamps.

Another big win to having a studio isolated this well, is that during summer it stays cool without the need for an airconditioner and during the winter there is hardly any heating needed. This saves quite a lot of energy as well next to the fact that the studio itself runs on solar-power since 2012.

The studio-desk is custom made by myself to have the least impact on the acoustics. Most mastering-desks are bulky and the bottom part is closed because of rackspace and stands. I didn’t like that idea and so I made an open desk with the smallest footprint possible. Big desks also reflect sound and causing comb-filtering, that is why I added fractal diffusors on the back of the desk. A lot of studio’s use big screens which block the soundfield or at least they have acoustic diffraction around the edges. I decided to use one big 42 inch angled and mounted on the floor, one 20 inch main screen suffit mounted in the desk and a small 10 inch screen for metering on the side. That way I have all the info that I need without blocking or messing up the soundfield. 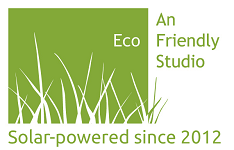